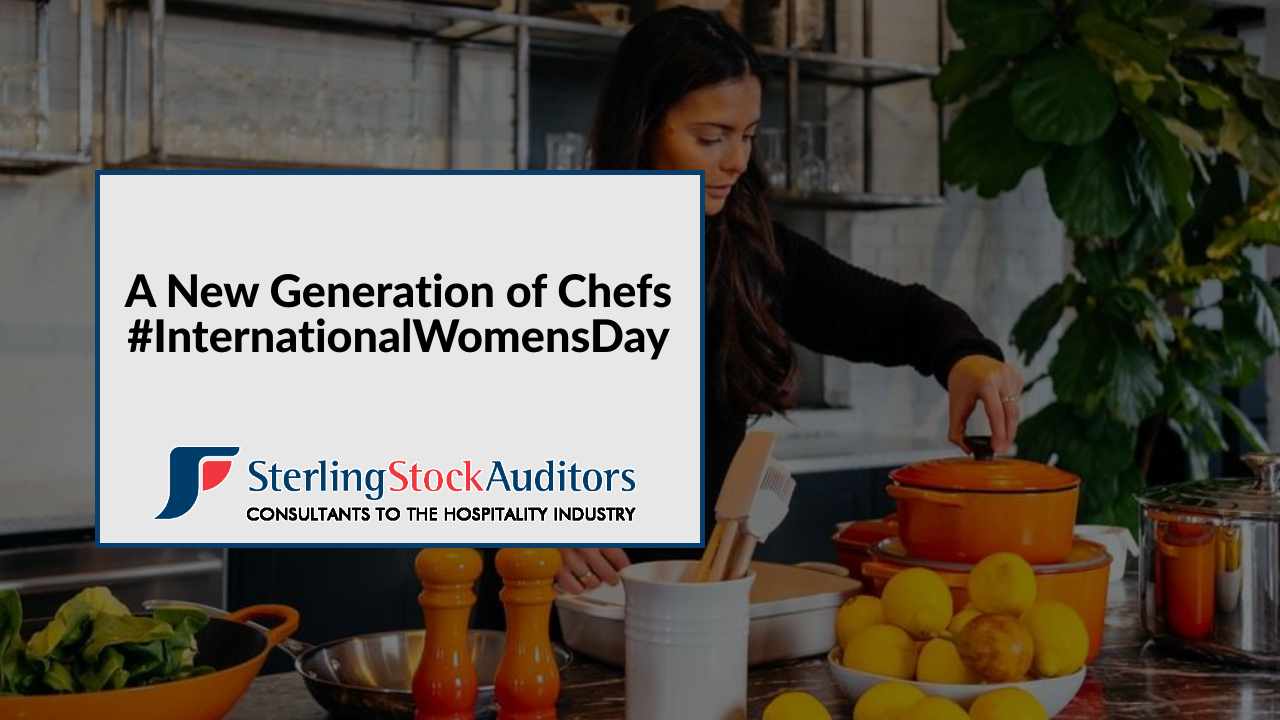 As we round out the day, let’s take a minute to celebrate and focus on females in the Hospitality Industry for International Women’s Day #InternationalWomensDay

Without them, there would be an even bigger gap and skill shortage, and there is no real reason they can’t lead the brigades of chefs, waiters, bar staff etc, so let’s hear if for female hospitality professionals everywhere….

Sadly even today there is a serious pay gap and opportunities gap between men and women within the Hospitality Industry, but there are still some incredible women shining through as examples of great female Hospitality Professionals.

In fact there is a whole new generation of chefs rising to the fore : Social Media Chefs

One such chef of note, not from a platform I frequent, but have an awareness of through my networks is…

‘POPPY COOKS’ aka Poppy O’Toole – She has risen to fame through the ‘viral’ short form video format over on TikTok, sharing her love of, as she says ‘The humble potato’ with the masses, engaging a generation who may otherwise not watch or consume anything to do with cooking!

And some of her dishes look and SOUND incredible!!

Poppy has even been featured by another recognisable name in female cookery stars Nigella Lawson’s blog that can be found here (another one who wasn’t familiar with TikTok!) https://www.nigella.com/cookbook-corner/poppy-cooks-by-poppy-otoole

Nigella Lawson also took a different path into hospitality & cookery – From restaurant critic, deputy literary editor of The Sunday Times (1986). Then embarking upon a career as a freelance journalist, writing for a number of newspapers and magazines. In 1998 her first cookery book, How to Eat, was published and sold 300,000 copies, becoming a best-seller. Her second book, How to Be a Domestic Goddess, was published in 2000, winning the British Book Award for Author of the Year!

Nigella also has an audience in the millions across social and is a household name, having broken down cookery to the point, she is known for teaching us ‘How To Cook An Egg’

Nigella is quoted as saying this of Poppy’s rise to fame & notability ;

‘I have yet to embrace the world of TikTok, and so I hadn’t come across the Poppy Cooks phenomenon during lockdown, during which her cookery videos got over 100 million views and, among other things, galvanised a generation of hesitant cooks with her passion for potatoes! I have made her acquaintance only through the pages of this, her first book, and I can see immediately that she is not simply a social media sensation but, heartwarmingly, the actual, real thing’

After being Furloughed Poppy O’Toole took to social media to share her love of cooking, focusing on the old spud to engage anyone and everyone in cooking more & enjoying the process!

Poppy O’Toole, AKA @poppycooks,has built a loyal following of 1.7M

Going from ZERO into the MILLIONS, since the start of the pandemic

And she certainly is doing that – sharing home cooking favourites, and becoming well known as ‘The potato queen’ of the app & beyond!

She has certainly had an interesting journey, from her Michelin-starred kitchens roots, to writing her first book, and she talks about why the industry needs a feminist shake-up…

From working in a pub and begging to get in the kitchen, starting out as a porter & starter chef… to at 19 seeing an apprenticeship come up for a Michelin-starred restaurant.

Poppy’s journey is far from the traditional route.

There was a competition for an apprenticeship in a Michelin-starred Restaurant & she wasn’t picked, but got a lucky wild card and was called back.

She worked her way up there over three and a half years, then I went to another restaurant in Birmingham that was a bit more experimental, but still fine dining. At this point she had done around five years of her young adulthood just sitting in kitchens when all her friends were out and partying instead. Which just show her dedication to her craft!

Just before the pandemic, Poppy found a job at a female members club, called The Allbright, which was a mainly female brigade, and after so many years of just working with men she really needed it, which she shares a little more about often.

March happened;
And she was furloughed!

In her first week of furlough, she had nothing to do, and she’d tried Instagram but never had the confidence to do it because she found it too pressurised! To be pristine and perfect isn’t her style – she shared.

‘TikTok was the new platform everyone was talking about and no one knew me on there – so there was no pressure!’

TikTok is changing the industry!!

There are a new wave of chefs who are taking a different non-traditional route into this amazing industry. And, why not?

Why would you want to go and work 70, 80, 90 hours a week when you could just cook at home and still get the amount of credit that is due to you?

They’re proper cooks, these social media chefs, but unfortunately a  lot of chefs on the ‘chefy’ side don’t understand or acknowledge what these young new style chef’s are doing.

Despite Poppy having 10-years of experience in fine dining kitchens, all that has now been disregarded because it’s currently being shared on social media, and because she is doing food that is more accessible, aimed towards home cooks, rather than like fancy restaurant style foods!!

That’s accessible to people at home.’

It really has changed the industry, especially over the past couple of years.
TikTok’s food trends and cooking are just good fun. We’ve got to just embrace it.
Otherwise, the hospitality industry just will be left in the dust on its own.

When it comes to struggles in the hospitality industry Poppy shared ;

KITCHENS AREN’T JUST BAD FOR WOMEN, THOUGH, THEY ARE VERY TOXIC PLACES FOR MEN – THEY CAN BE FUN BUT THEY CAN ALSO BE NOT NICE, WITH A LOT OF SHOUTING, STRESS AND ANXIETY. THEN WOMEN HAVE SEXUAL HARASSMENT ON TOP OF THAT TO DEAL WITH.

I’ve used my platform to speak out about this, I’m not trying to take people down but things need to change for men and women in this industry. Otherwise, it’ll be a place no one wants to work.

Most of my chef friends don’t want to go back to work after the pandemic because they’ve realised that being shouted at constantly, etc, isn’t okay – it’s hard to go back to that have almost two years away from the atmosphere of kitchens.

THE SAD TRUTH ABOUT WOMEN IN THE HOSPITALITY INDUSTRY….

Female chefs are not uncommon, but there’s still a certain fascination with what it means to be a woman in such a male-dominated landscape and hierarchical environment.

According to data gathered between 2009-17 by the Office for National Statistics, only 17 percent of chef positions in the UK are held by women.

They’ve been cooking professionally for millennia and in the restaurant industry, but the metrics by which restaurants are judged still don’t reflect that.

‘There’s a stupid idea in hospitality that to get ahead you need to adopt classic “macho” behaviours. I hate this! I know loads of women who’ve been told to “toughen up”, “not get so emotional”, “just deal with it” and “grow a pair”.

Not only are these completely outdated and, frankly, offensive phrases, they actually put women off the industry entirely. No one needs to behave like this in any workplace, especially not hospitality. We’d be a far richer, better and more inclusive industry if we encouraged people to be themselves, talk openly and honestly, and not be afraid of failure. A lot of people do think like this and it’s getting better, but we still have a long way to go to rid ourselves of these kinds of patriarchal attitudes!’

Currently, 65% of all part-time roles in the hospitality and tourism sector are filled by women, rising to 82% in contract food and service management and 72% in hotels.

Currently, 58% of second jobs are filled by women and there are more than 3,000 women working as a second job in the sector than there were three years ago.

The challenge for many businesses trying to increase staff retention and progression is that many women are in part-time roles that offer fewer progression opportunities.

For example, women make up the majority of those working in school and industrial kitchens, yet we still have a critical skill shortage for chefs, similarly whilst 71% of waiting staff are female, they represent only 39% of restaurant managers.

Across the hospitality and tourism sector the pay gap between men and women is narrowing, but women are still earning less than men. Is this discrimination or a reflection of the types of roles being filled by women? Women are consistently earning less than men at an operational level, although these vary across different roles. The greatest contrast in earnings is between men and women working as cooks, with men earning on average £4,358 more per annum. This contrasts to the increased £1,863 that men on average are earning per annum working as chefs than women.

Similarly, at managerial levels, women are consistently earning less. However, the pay differential is much more varied and is greater overall compared to operational roles:

Since 2009, the pay gap between men and women has narrowed and in some instances by considerable amounts. In 2009, women working as chefs were earning 53% less than men, whereas this has narrowed to 12%. Similarly, the gap for those working as receptionists has narrowed by 26% in the past five years. However, the gap between men and women working as catering and kitchen assistants has widened by four percent. Again, the term kitchen and catering assistants can mean different things in different work settings and the widening pay gap is likely to reflect pay curbs in the public sector where more women are found than any instances of discrimination. At managerial level, the gap between male and female pay for those working as publicans has narrowed by 14% since 2009 and the gap for restaurant managers has narrowed by four percent. However, women are still earning on average 21% less an hour and is likely to reflect the pay differentials in different hospitality industries, where more women are found working in the public sector

Only 12% of employees report that their organisations offer training in how to overcome unconscious bias, while only 16% report that their organisation offers training on developing an inclusive style of leadership. Training can be a real eye opener for employees in raising awareness and changing attitudes, so it’s imperative that this is recognised further within the industry.

2019’s edition painted a fairly positive outlook for the industry, and this message continues in 2020’s report, with the sector making progress on gender and ethnic diversity as witnessed across all headline figures. Female and BAME representation at each of the most senior levels has increased – Board (up 5.3% for women / 4.6% BAME), Executive Committee (up 1.8% for women / 1.4% BAME), and Direct Reports (Up 1.7% for women / 1.1% BAME), demonstrating that real action has been taken at scale across the UK.

Worryingly, there continues to be a lack of women in the key strategic leadership roles – though there is progress here too. The number of all-male leadership triumvirates (CEO, CFO and Chair) in our sector fell from 87% in 2018 to 74% in 2019.

What are the key takeaways from today’s blog?

We need to give women opportunities, support & encourage them & celebrate the, based on their merits & achievements. For far too long it has been a male dominated industry riddled with old fashioned values, and social media is already disrupting that. If we want the industry to thrive, as with anything we need to change, adapt and innovate.

What do you think are three things we can do to move things forward, and create a more welcoming industry & create more opportunities?